Hey everyone, just stopping by to drop a quick word from former Nfl/current actor Terry Crews and the Polaris Project

I’m tired and a little stressed out.  I hadn’t planned on writing anything today but I did get on to read the blogs I follow and read the stories with trafficking tags.  I came across a great video put together by MTV EXIT.  I honestly haven’t paid much attention to the Exit campaign in the past but this video is really very good.  Take the time to watch  it:

Also, I reached out to the Polaris Project earlier this week wondering if they knew of any good job/volunteer opportunists here in Texas.  The referred me to this great site http://www.idealist.org  If your interested in getting involved with any form of charity try checking it out.  It seems like a pretty good database so far. 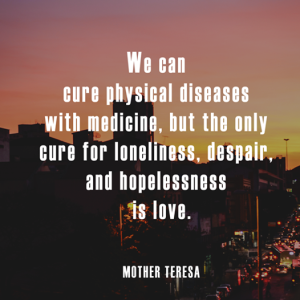 lastly, shared hope is having an event sept 10th:

Online classifieds like Backpage.com, MyRedbook.com and Eros.com are now a primary venue for traffickers to sell sex with minors and for buyers to purchase sex with child victims of trafficking.  Classified websites that promote commercial sex acts provide anonymity and accessibility to individuals looking to exploit vulnerable youth. The Feinstein-Kirk Stop Advertising Victims of Exploitation Act (SAVE Act, S. 2536) combats Internet sex trafficking makes it unlawful for a person or business entity to use the Internet to sell, commercially promote, or maintain an adult advertisement(s) with reckless disregard of the fact the adult advertisement(s) facilitates or causes a person under 18 years to engage in a commercial sex act under federal or state law.

to learn more about the SAVE Act and how you can TAKE ACTION.

Click here for a fact sheet on The Feinstein Kirk Save Act from Senator Kirk’s Office. You can read the full bill text here.

Sometimes it’s hard to remember that verse. In Christ we are all the same. Equals where race, gender, social status, and wealth fall away. Every victim is our brother and sister. -Religion aside- they’re humans. Our not so distant ancestors fought wars to set men free that we could all be equals. Do we forget their sacrifices so easily? The American civil war, which started out because of the issue of slavery is still the deadliest war in American History. We still talk about heroes of the Underground Railroad who helped to smuggle slaves out of the confederate south. One of the men who escaped slavery in the south, Fredrick Douglas, once said:

“I expose slavery in this country, because to expose it is to kill it. Slavery is one of those monsters of darkness to whom the light of truth is death.”

Just by letting light in on the modern slave trade, we can fight the trade. Awareness can help break the cycle. I was in a class recently, and at the end of the class the teacher gave each student a note with a quote on it. My quote was, “Showing up is 80 percent of life.” -Woody Allen. People getting involved and standing up against the trade will be 80% of the fight. Awareness can reduce victims and recognize victims. If the traffickers feared society’s response to their activities the crime would not be so easily gotten away with. It would certainly not be as easily to forget.

The Spirit of the Lord is upon me, because he has anointed me to proclaim good news to the poor. He has sent me to proclaim liberty to the captives and recovering of sight to the blind, to set at liberty those who are oppressed

Awareness. I’ve mentioned it a lot. Most places do. So what are we supposed to be looking for? The following list is from the Polaris Project:

If you see any of these red flags, contact the National Human Trafficking Resource Center hotline at 1-888-373-7888 or text to BeFree (233733) for specialized victim services referrals or to report the situation. Click here to learn more about reporting potential human trafficking situations. This list is not exhaustive and represents only a selection of possible indicators. Also, the red flags in this list may not be present in all trafficking cases and are not cumulative.

Common Work and Living Conditions: The Individual(s) in Question

For those of you who are students, workers, or travelers please look into posting fliers at the sites you can. The Polaris Project has numerous Flyers available including ones written in about a dozen languages. 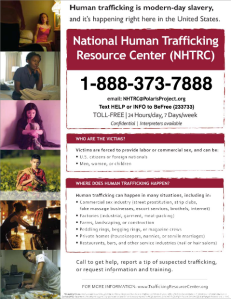 We can do more.

“You and I have a rendezvous with destiny. We will preserve for our children this, the last best hope of man on earth, or we will sentence them to take the first step into a thousand years of darkness. If we fail, at least let our children and our children’s children say of us we justified our brief moment here. We did all that could be done.”

When Ronald Reagan said those words he was talking about fighting poverty in the United States.  They are words that have stuck with me since I first read the speech in High School.  They even started or ended many of the criminal justice and sociology papers I wrote for my degree.  I think the key part comes in at the end, that we justified our moment here and that we did all that could be done.  I guess it goes along with that idea that is better to die for something than live for nothing.  Our world currently is experiencing true problems all over.  There are a thousand causes one could rally behind.  There are a thousand ways a person could work to make this world a much better place.  The only thing in my head though, is the 30 million people who cannot choose what their life should and will mean.  I can’t really imagine what it would be like to live the lives they lead.  I sometimes try and I want to believe that in that situation I would find a way to break out of it or at the very last keep my hope and survive it.

In reality, I know that would likely not be the case.  Traffickers are the worst of the worst.  They excel at preying on psychological weaknesses not only to recruit victims but to keep victims absolutely terrified, broken, and hopeless. In this video linked just below, Shared Hope International kind of gives you a crash course in human trafficking.  At right around the 2:50 mark a sex trafficker named “Joel” gives an interview.  He pops up again later in the video.  I have not been able to get his voice, his smile, or his words out of my head for over a week.  Even if I could I am not sure I would because “Joel” will drive my passion.

I watched that video as part of my training for shared hope.  “Joel” will now be a constant reminder of the soulless husk traffickers are.  In the United States it is estimated there are 2-300,000 trafficked minors.   That is a lot of zeros.  When you expose yourself to this field at a constant rate you begin burning out.  You begin seeing the numbers as just a statistic.  When I first began researching trafficking I ended up burning out and distancing myself from it because it was too much to dwell on.  Every single one of those numbers, matter.  Where there are humans capable of great evil there are a dozen more capable of great good, compassion, and love.

Trafficking is a complex crime.  It is hard to detect, hard to prosecute, and near impossible to prevent.  That does not let us off the hook though, we must do all that can be done.  Where trafficking had its great boom in the 1990s, the anti-trafficking movement and the laws that follow in its wake are two decades behind.  There are still states in the US and countries in the western world that have no laws for trafficking.  Luckily in the US there are federal laws to prosecute them under and slowly but surely groups like shared hope and the Polaris project are getting the state laws updated.  Internationally, the United Nations office on Drugs and Crime is pressuring countries to establish trafficking laws and helping them to define what trafficking is (which sounds weird but there is a huge debate internationally as to what should constitute a trafficked human).  I am pleased that for all our short comings that the United States makes a truly international effort to curb trafficking.  The State Department’s Trafficking in Persons Report (known as Tips) ranks every country on a scale of 1-3.  The countries who do near nothing to stop trafficking or do not do enough end up receiving no non humanitarian aid from the United States and also will have the United States vote no on any loans from the world bank.  The system has proven to be effective in a few countries.  Sadly, allegations of corruption and bias plague the report every year. Still.. It is something.

So what can the average person do?  Get involved and get educated.  The best way to curb trafficking is awareness.  Most people don’t even really know what trafficking is (this sort of goes with that argument I mentioned above).  Most people have the impression that trafficked victims must be moved from place to place.  Although that is often the case, trafficking does not require moving the victim.  Trafficking is really best defined as slavery, which has become a new push for the Anti-trafficking movement where many charities and NGOs are adopting the word slave or modern slavery to replace trafficking.  I encourage you to remember every time you hear the drastically large number concerning victims in the US or abroad that each one of those numbers matter.  Each one is a child, a mother, a father, a brother, or sister to someone.  Remember people like “Joel” are the ones taking these children and delivering them to even worse humans.  Remember the struggle these people must have and lives completely void of hope.  We are their hope.  We are their last best hope. 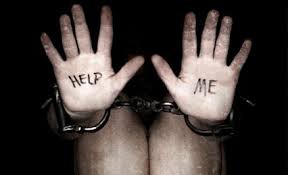